Posted by Sara C.– Almost all of my dolls were named Alice. This doll was named Alice and I remember that she was one of my favorites.  Besides my American Girl Dolls, she was my only doll that was not a baby and by far that prettiest. I was not the only one to think so because one day, my youngest sister took Alice without my permission to play with. That night, I came home to find Alice hidden underneath the covers of my doll bed withboth of her eyes pushed back into her head. I was absolutely devastated! Wanting to keep her from further harm, I placed her on the highest shelf of the bookcase in my room and I ceased to play with her so that she could not be ruined anymore.  Despite her condition, I kept Alice on display in my room. I tried many times to fix her eyes, but as you can see, she remains eyeless. 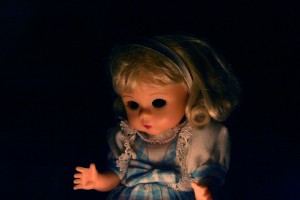